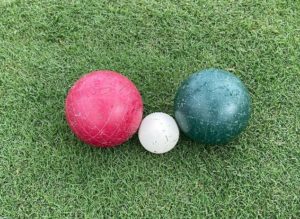 Greetings from the Tony Fava Bocce League Committee at Cross Creek Country Club. The Bocce committee has been busy since mid-November determining what teams are returning for the 2023 season and filling in where people have dropped out. Last season our numbers were down for various reasons. This year 26 new people were placed on teams. The committee also voted to reduce the Bocce fee this year from $10.00 per person to $5.00 per person for the coming year. The Bocce season will begin on January 9th starting with Monday play followed by Tuesday, Wednesday and Thursday league play on successive days. League play will be for ten consecutive weeks. The eleventh week will be playoff week with the Championship determined on Saturday March 25th followed by our Banquet at the Clubhouse.

As in the past please follow the Bocce news, schedules standings and more on are website www.crosscreekfl.com/AboutUs/Cross Creek Clubs.

From the Bocce committee Happy Holidays and safe travels.